The ABC hit Once Upon A Time returns on March 9th, and we’ve got the latest scoop!

Rumors have circulated for months about what’s coming on the second half of Season 3 for OUAT. While the mid-season finale left some devastated, we can all be assured that creators Adam Horowitz and Edward Kitsis still have some tricks up their sleeves. They revealed to TV Line that a major character will die, and the actor playing him or her will not be returning to the show. Interestingly enough, they confirmed that the actor is not Robert Carlyle who, in sacrificing himself for Storybrooke in the last episode, many believed to be gone. This has left some speculating death for either Neal or Captain Hook, effectively ending that particular love triangle.  Horowitz has hinted that he has a future in mind for Belle (played by Emilie de Ravin of Lost fame), does this mean a grand re-entrance for Rumplestiltskin?

Now that the Neverland arc has wrapped, Kitsis and Horowitz are jumping straight into a  story line based around Frank L. Baum’s land of Oz. We’ve known for several months that another nemesis for Regina will arrive in Storybrooke — the Wicked Witch of the West, played by Rebecca Mader. Horowitz told THR that the Wicked Witch is, “a completely different kind of villain and the kind of character we’re excited to unfurl on the audience.” And where would “Elphaba” be without Glenda the Good Witch? It was announced recently that Sunny Mabrey had been cast to play Glenda, but it’s not clear whether Mabrey will appear in Storybrooke as well or in a limited flashbacks-only capacity. 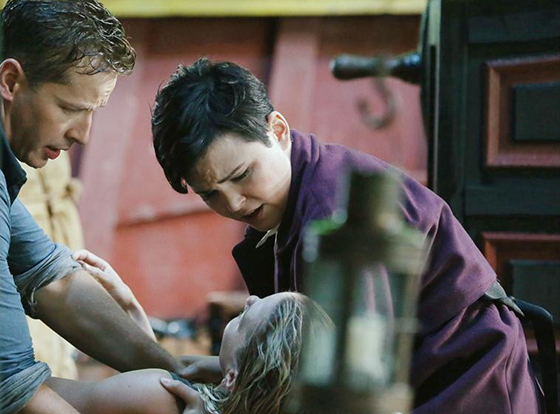 Other characters to expect this season? Cora (reprised by Rose McGowan) and a young Prince Leopold (played by Eric Lange, another Lost alumni), in what will presumably be a flashback filled episode; Alexandra Metz was recently cast to play Rapunzel, ABC released a still of Metz in an outrageous wig standing next to Prince Charming (Josh Dallas). Lumiere — as in the singing candlestick of Beauty and the Beast — will also make an appearance played by True Blood star Henri Lubatti. Perhaps the most exciting character will be a reentrance of Robin Hood (reprised by Sean Maguire), who we discovered to be “Regina’s second chance at love” earlier in the season.

The question remains, will Mader’s Wicked Witch allow Regina any kind of Happily Ever After?

Ready for the return of OUAT already? Regina, Snow White, Prince Charming, Emma and Henry return on March 9th. In the meantime, catch the newest promo below!