Last night marked the first show for Seth Meyers’ Late Night and, along with his stellar studio band, he had a fantastic first guest.

Meyers’ seems to be surrounded by plenty of support from friends and colleagues based on the very first episode of Late Night last night. Though he got off to a shaky start with his monologue (it’s probably safe to chalk that one up to nerves, wouldn’t you say?) his easy and entertaining banter with Fred Armisen confirms his choice for studio band to be a great one.

Amy Poehler joined Meyers on stage as his first guest, giving fans of the “SNL Weekend Update” a minor sense of Deja Vu. The long time friends recollected on their small beginnings together in the same SNL class, Poehler called out Armisen on their “turbulent love affair” and made a public statement to George Clooney regarding their prank war, “I’m going to say what I think no other woman has said to Clooney before: Stop. Please, stop.”

Meyers and Poehler were later joined by U.S. Vice President, Joe Biden. This makes a second meeting for Poehler and Biden, who had an intense cameo on Poehler’s beauracratic comedy “Parks and Recreation.” 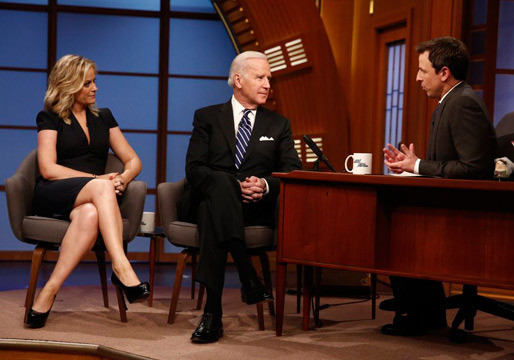 What do you think? How is Seth Meyers doing so far?